She was purchased privately for owner Barbara Keller by Alastair at the start of her 4yr old career, after winning a listed race. The 4yr old mare by Falco improved for trainer Karl Burke every run, she finished her 4yr old season by finishing 2nd in the Gr. 1

EP Taylor Stakes at Woodbine. As a 5yr old she continued to improve, winning a Gr. 3 in Germany and then going on to win the Gr. 1 Prix Romanet at Deauville, she then concluded her racing career with another Gr. 1 in Italy. She went to Tattersalls December mare sales as a dual Gr. 1 winner of

£425,000 in prize money, she then sold for 1 million guineas to an American breeder. She was a huge thrill to her owner and a massive profit maker. 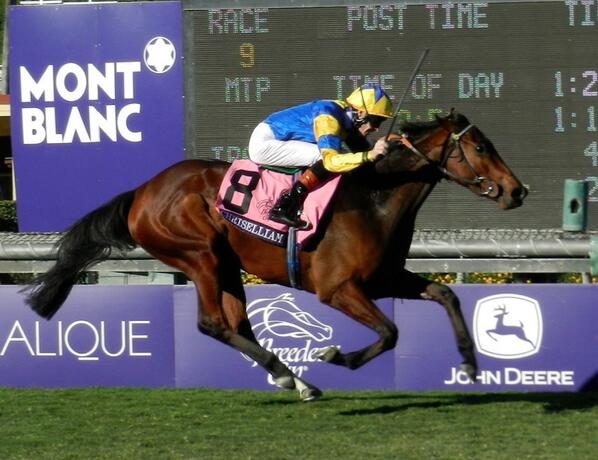 Purchased by Alastair for just 40,000gns at Tattersalls Book 2, the daughter of Ifraaj went into training with Charles Hills. She was owned by Chris Wright, ex-jockey Willie Carson and Emily Asprey, she broke her maiden in a track record at Warwick. Highly thought of at home, she had a bad journey to France but bounced back to be a good 2nd in a Listed race against colts. She went to the Gr. 1 Fillies Mile as a 33-1 shot, but she came from last to win going away under jockey Richard Hughes. She then ventured to California for the Juvenile Fillies Turf, where she bolted up winning virtually on the bridle. These two Gr. 1 victories ensured she won the title of Champion 2yr old Filly and the Cartier Award. Over the winter she was red hot favourite for the 1,000gns, but due to an unusual hoof infection, things complicated and very sadly she was put down. She was the Classic winner that got away! Richard Hughes still says she was easily the best filly he ever rode.

My Kingdom of Fife

This tough older horse was purchased for just 60,000gns at the Tattersalls horses in training sale for Aussie owner Richard Pegum, she had been sold by The Queen when trained by Sir Michael Stoute. The 5yr old made his debut at Randwick and won a Gr. 3 first time out at amazing odds of 150-1, he followed this up with another easy Gr. 3 win. Ironically after being sold by The Queen he then made it 3 in a row by winning Gr. 1 The Queen Elizabeth II stakes at Randwick. A race that is now worth $2 million Aus, he finished his Aussie career with earnings of £650,00.

Spirit of Xian was purchased by Ed as a yearling and managed by him as a racehorse on behalf of Rockcliffe Stud, the owners of Sky Lantern. The brief with Spirit of Xian was the same as with Sky Lantern- to buy a good looking, well bred yearling, with the intention of her becoming a black type performer on the racecourse and then retiring to stud. Spirit of Xian won at first time of asking, a sixteen runner maiden at Newmarket in April. She looked like a very promising prospect but never quite delivered in European black type races for the remainder of the season. At the end of her two-year-old career Spirit of Xian regained her form when running out an easy winner of a conditions race around Chester’s tight left handed bends. A management decision was taken to send Spirt of Xian to Hall of Fame trainer Richard Mandella in California, the view being that the left handed American tracks are similar to Chester. The decision was promptly rewarded when Spirit of Xian won the Grade 3 Providencia Stakes at Santa Anita. Spirit of Xian went on to be placed in a Grade 2. Having earned her place at stud Spirit of Xian will now be covered by Speightstown.

Besharah was purchased by Ed and Ed Player of Whatton Manor Stud as a foal for 30,000 guineas at Tattersalls in 2013. Having bought a Kodiac filly for 115,000 euros (Spirit of Xian see above) as yearling two months previously Ed was very keen to buy a filly foal by Kodiac. In fact Ed was keen to buy any foal by Kodiac having previously enjoyed a lot of racecourse success with the sire through the likes of Coulsty and Bear Behind.  Over the spring and summer the 30,000 guineas Kodiac filly developed into an athletic and racey yearling. She was purchased by Jono Mills of Rabbah Bloodstock, the buyer of that year’s Guineas winner Night of Thunder, for 85,000 guineas, there by giving a significant return on her foal price. The filly was subsequently named Besharah and won four times as a two-year-old, including the Gr. 2 Lowther Stakes and Gr. 3 Princess Margaret Stakes.

Other notable pin hooking success include the purchase of a Sea the Stars colt from New England Stud for 32,000 gns at the Tattersalls December Foal sales 2015. He was sold ten months later, again at Tattersalls, for 300,000 guineas.

“Alastair has been buying horses in training for me, for many years. Not only have I found him to be an outstanding judge of horses, he is also great at knowing their form, an excellent horseman and a totally honest and very nice person with it. The horses that Alastair has bought for me, have an outstanding record: every single one has gone on to win after I bought it and an anbelivable 62.5% have gone on to be Group winners, Group placed, or listed winners. Including the outstanding double Gr1 winning mare ODELIZ. Alastair is quite simply the best judge of horses in training! I would recomend Alastair in the highest form to anyone.”

“SackvilleDonald make the process of buying and selling horses a joy. They thoroughly deserve their reputation as the leaders of their generation.”

“I have been using the services of SackvilleDonald since the company was formed in 2011. Since then, year in year out, we have enjoyed tremendous success together in the sales ring with our foal purchases. Between them Ed and Alastair have a comprehensive knowledge and understanding of the racing and bloodstock industry. I find them both a pleasure to work with.”